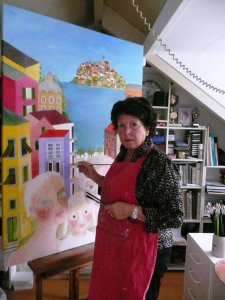 Marianne in her studio

Marianne has been drawing all her life. As a child her talent for drawing was discovered and she enjoyed extra lessons on wednesday afternoons. She lives and works in Schoorl, a village close to the coast, north of Amsterdam, and has a education in creative skills. Later in life she became a sculptress and was taught by Karel Gomez and Jan Willem Rädecker, two famous Dutch sculptors. Nowadays her interests have shifted towards painting. Her style attracts attention because of the use of brilliant colours. Her paintings usually portray human faces, in which the eyes play a prominent role.

She also made several works in commission.

A selection of her paintings is shown here under the heading "Schilderijen".